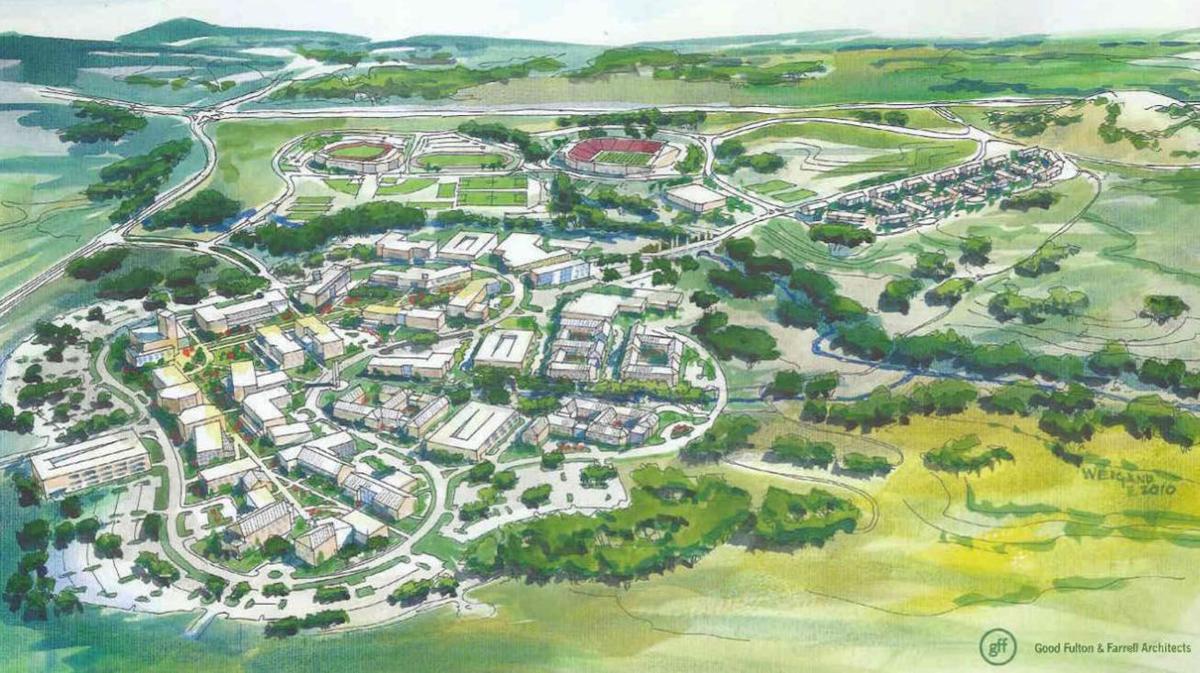 This rendering, provided by Texas A&M University-Central Texas officials, shows what the campus may look like in 30 years. Campus officials are working on constructing a research park on the university’s campus. 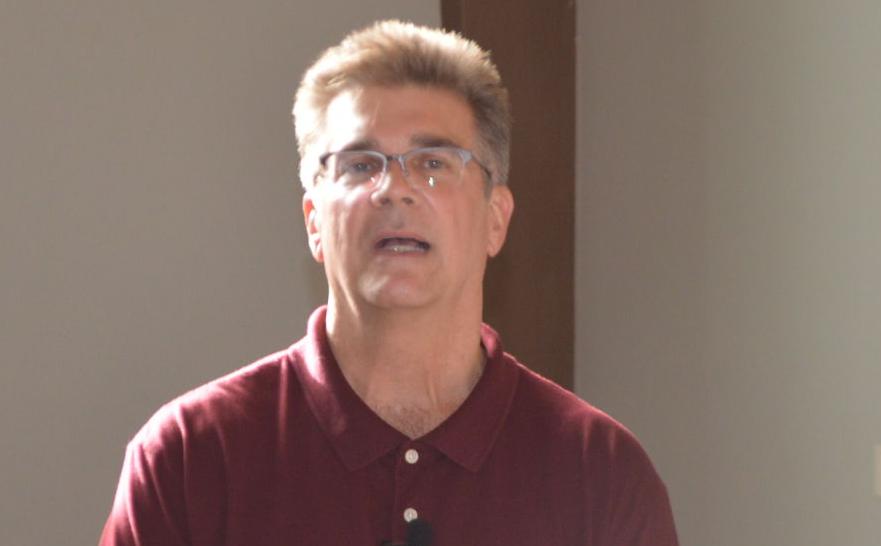 Brian O’Connor, vice president of the Killeen Economic Development Corporation, speaks to residents at an informational meeting June 26 in Killeen. 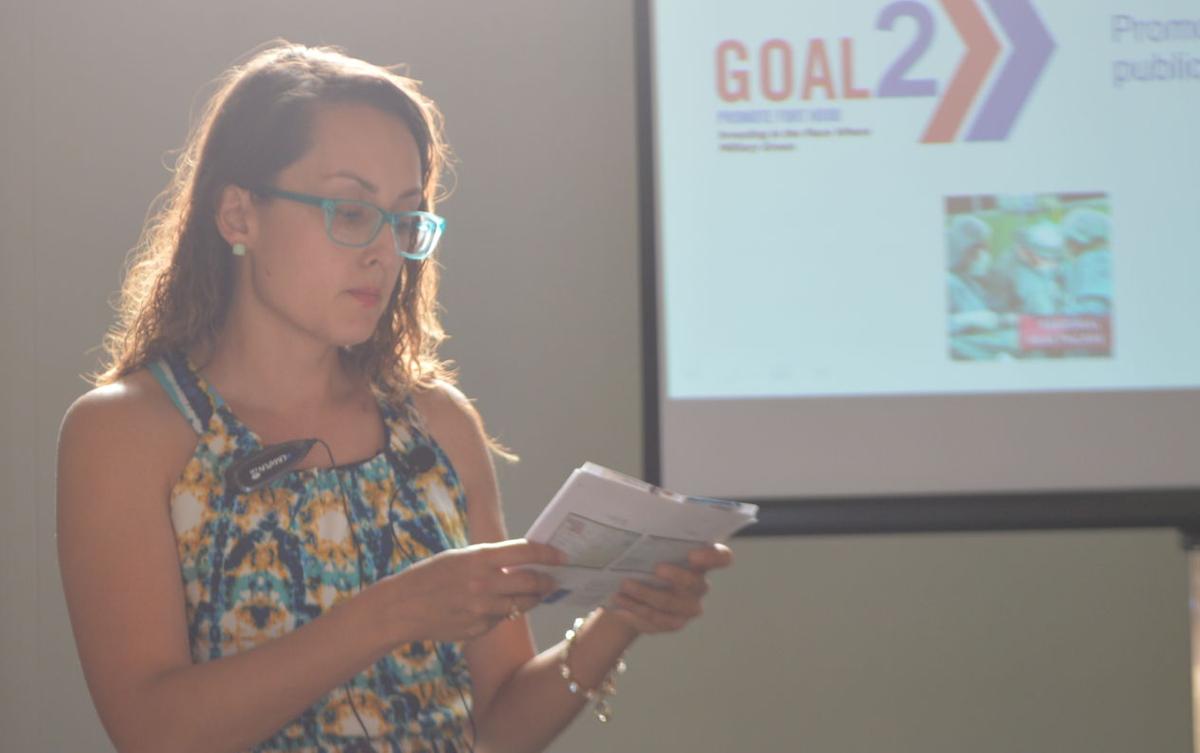 Jennifer Hetzel, director of research for the Greater Killeen Chamber of Commerce, speaks to residents at an informational meeting June 26 in Killeen.

A local business organization spearheading efforts to bring more companies to the Killeen Interstate 14 corridor is making headway on getting a new research facility to be built on the grounds of Texas A&M University-Central Texas.

One of the big goals with 14 Forward is the development of a research park on the campus of Texas A&M University-Central Texas in south Killeen. The Greater Killeen Chamber of Commerce created 14 Forward in January of 2017. Funded by private investors, 14 Forward is a five-year economic development initiative for the city of Killeen and Fort Hood. The name derives from Interstate 14 that runs from Copperas Cove to Belton.

“The university is seeking to commercialize research in the areas of big data, cyber security and alternative energies,” said Brian O’Connor, vice president of economic development for the Killeen chamber.

John Crutchfield, the chamber’s president, said it will also do research in the areas of defense, healthcare and cyber security.

“We know … we being the business community and community at large … the university should do more than just educate, it should do research,” Crutchfield said. “And it should become the next big economic development driver in the community.”

The university still needs to identify a location for the research park on the campus, but once that is complete, they will be able to pursue grant money, Crutchfield said

The working group began planning the research park when 14 Forward was implemented. Since then, the group has visited several university research parks to see how they are set up and how they govern them. Two stood out as good examples of what working group officials are looking for — the Cummings Research Park in Huntsville, Alabama, and the Central Florida Research Park in Orlando, Florida. Four people from the working group went, and the visits were paid for by the 14 Forward Foundation. The visits included plane tickets and one night in a hotel, officials said.

“Texas A&M University-Central Texas is now a member of the Association of University Research Parks,” said Russ Porter, a business professor at the university, via email Thursday. “As a member, the university is assessing what models of university research parks exist and how the different models can be best to support economic development in the community.”

O’Connor, said the designation of I-14 was important to Killeen, because 40% of the jobs and population in Texas are centralized in the 22 counties that run along I-35.

The Chamber identified three goals for 14 Forward when it began. Those goals are to grow business and investment, promote Fort Hood and improve infrastructure.

As part of growing business and investment, 14 Forward participates in targeted business recruitment. They recruit businesses in the defense industry, information technology, transportation/logistics and business services. The reason for targeted recruitment of those industries is because of the military workforce, something O’Connor said is a competitive advantage for Killeen.

“We have identified a few different areas in which we hold a competitive advantage over other communities,” O’Connor said. “We have a huge workforce coming off of Fort Hood each and every month … a vast majority are trained in logistics and transportation and information technology.”

KEDC held a meeting earlier this summer to inform the community of 14 Forward and what it has done in its first year and a half. Approximately 15 residents showed up for the meeting.

“The 14 Forward initiative is important for the entire region,” Caggins said. “And it looks like a lot of the objectives will benefit Fort Hood soldiers and families with more education opportunities, employment opportunities, and is another sign that Fort Hood really is ‘The Great Place.’”

Sandra Blankenship, a Killeen resident who has run for office, said she hopes the initiative works.

“I really, really hope it works to bring in more innovation and better jobs and better things in this community,” Blankenship said.

What residents can do

14 Forward officials are seeking input from residents. They have put a survey on the 14 Forward website with 16 questions. The questions range from what are Killeen’s biggest strengths and weaknesses, to what kind of businesses residents would like to see in downtown Killeen.

“The 14 Forward Foundation is seeking community comment on its Plan of Work and efforts to bring investment into the Killeen-Temple-Fort Hood region,” the survey website said.

The survey can be found in the top right corner of the 14 Forward website at https://killeenchamber.com/forward.