Education by the decade: Killeen’s upper-level public university has come a long way… and there’s more on the horizon 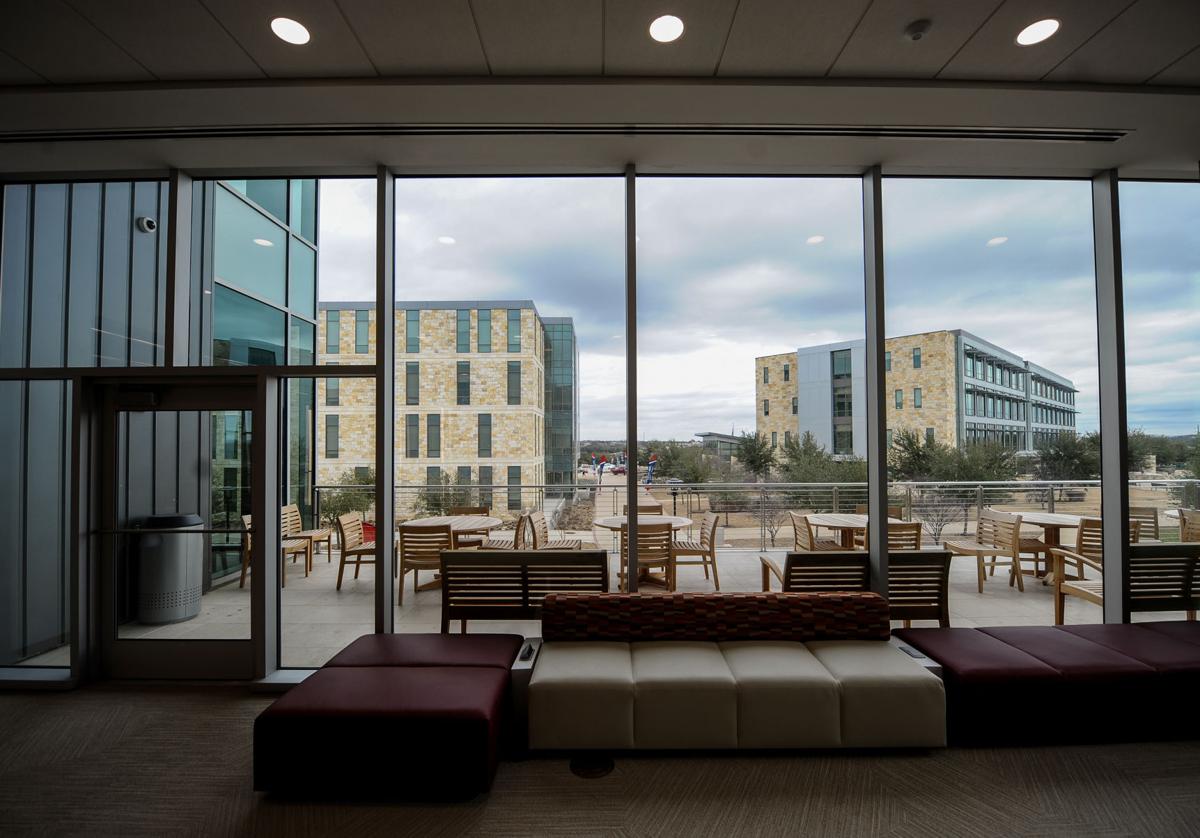 Looking out from Heritage Hall’s second floor Warrior Hall, left, and Founders Hall to the right are seen. Heritage Hall was dedicated on Friday, Jan. 25, 2019, officially opening the building on the campus of Texas A&M University-Central Texas. 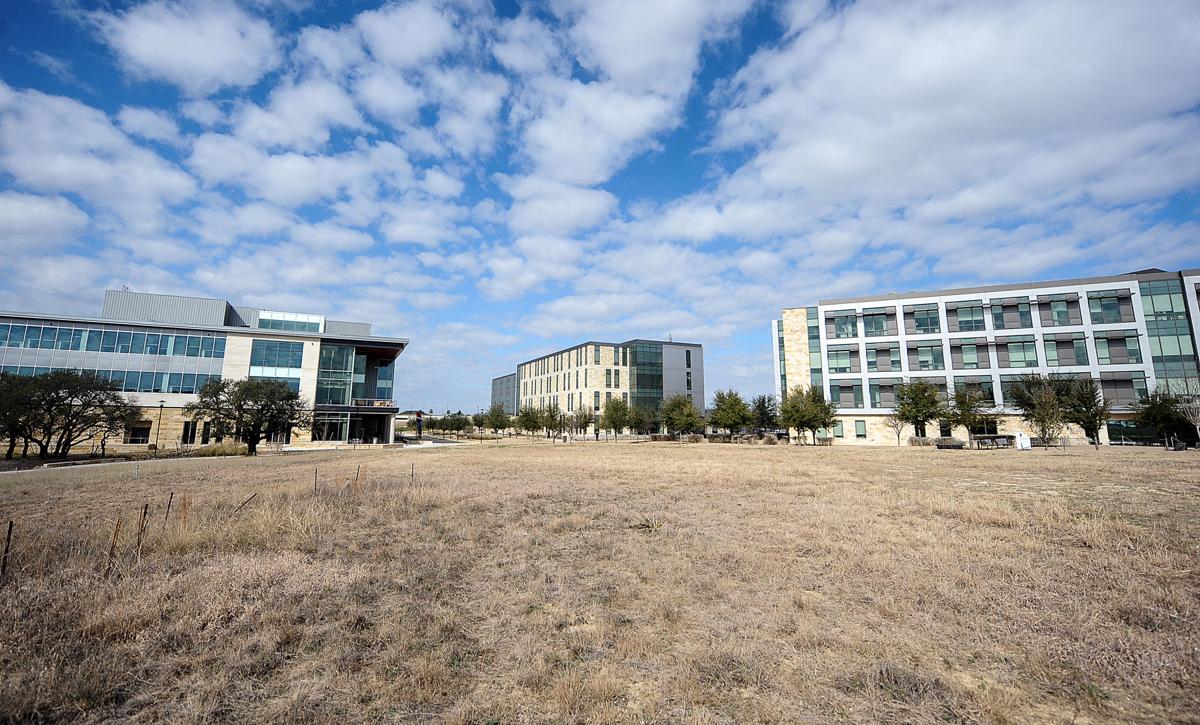 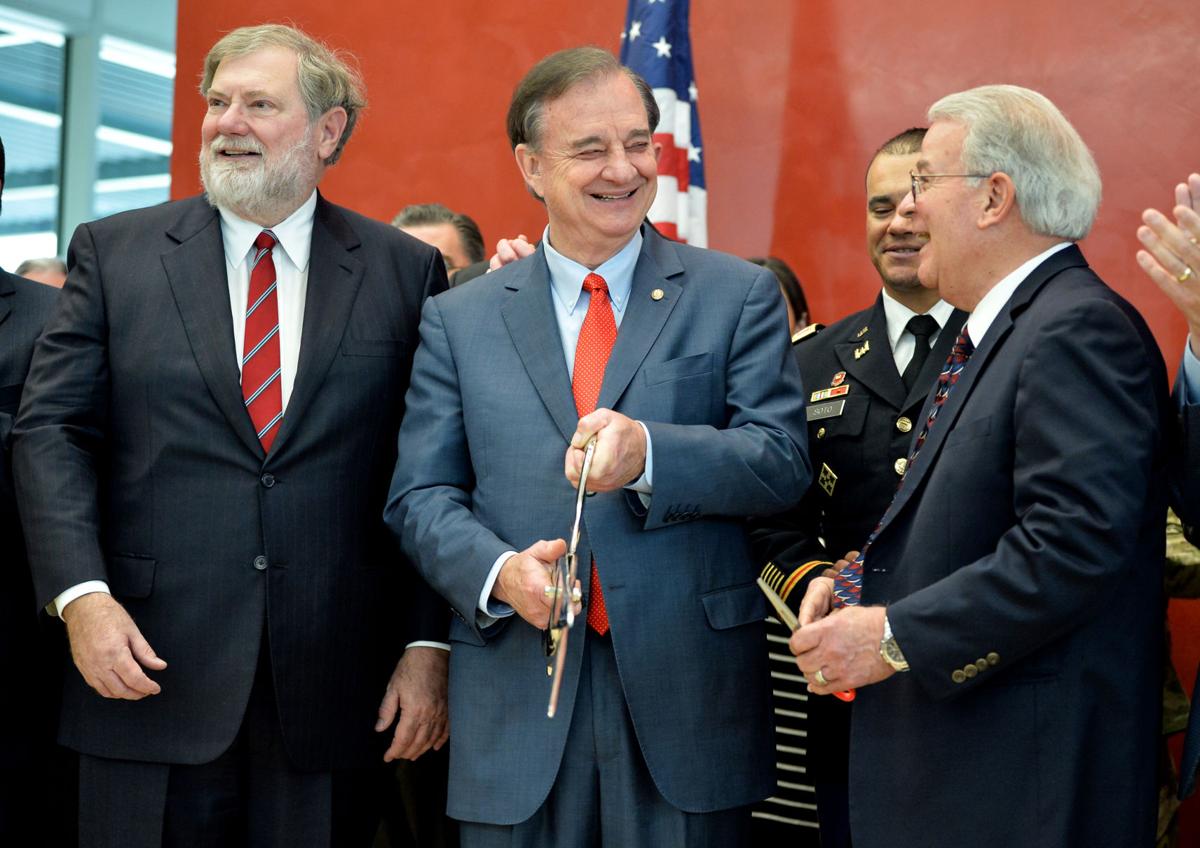 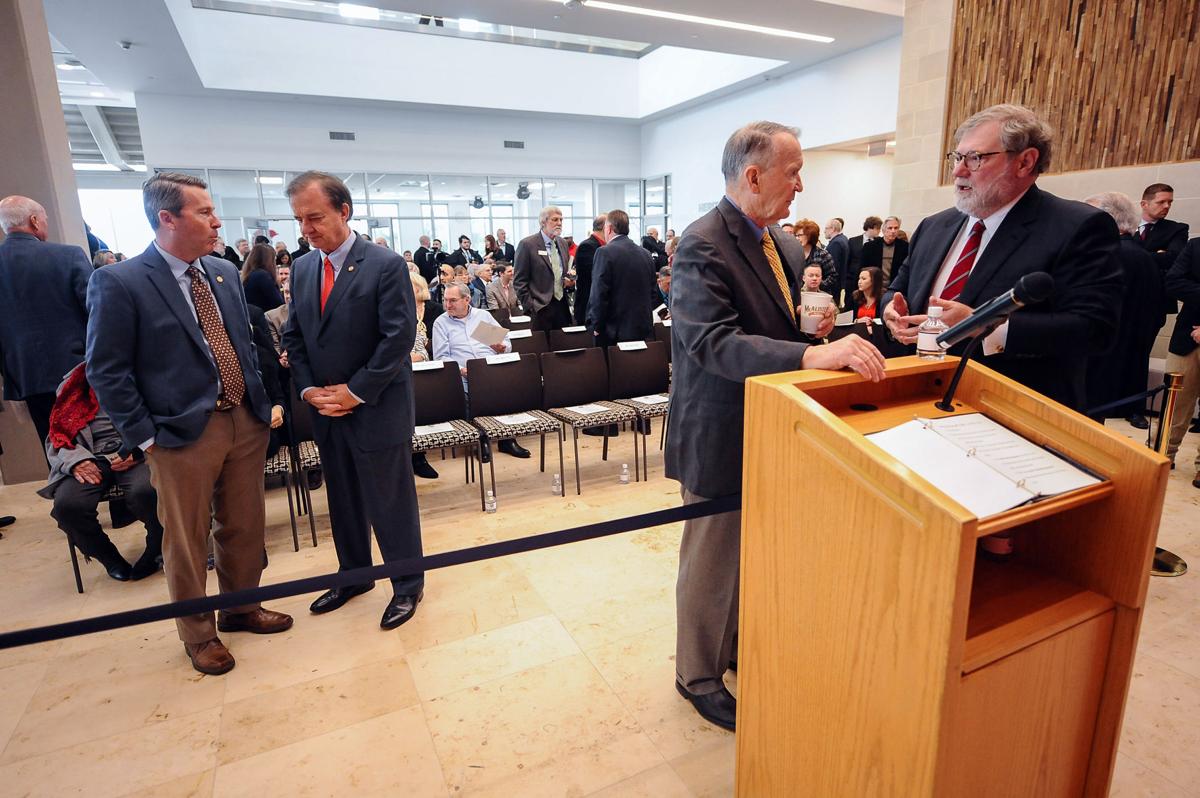 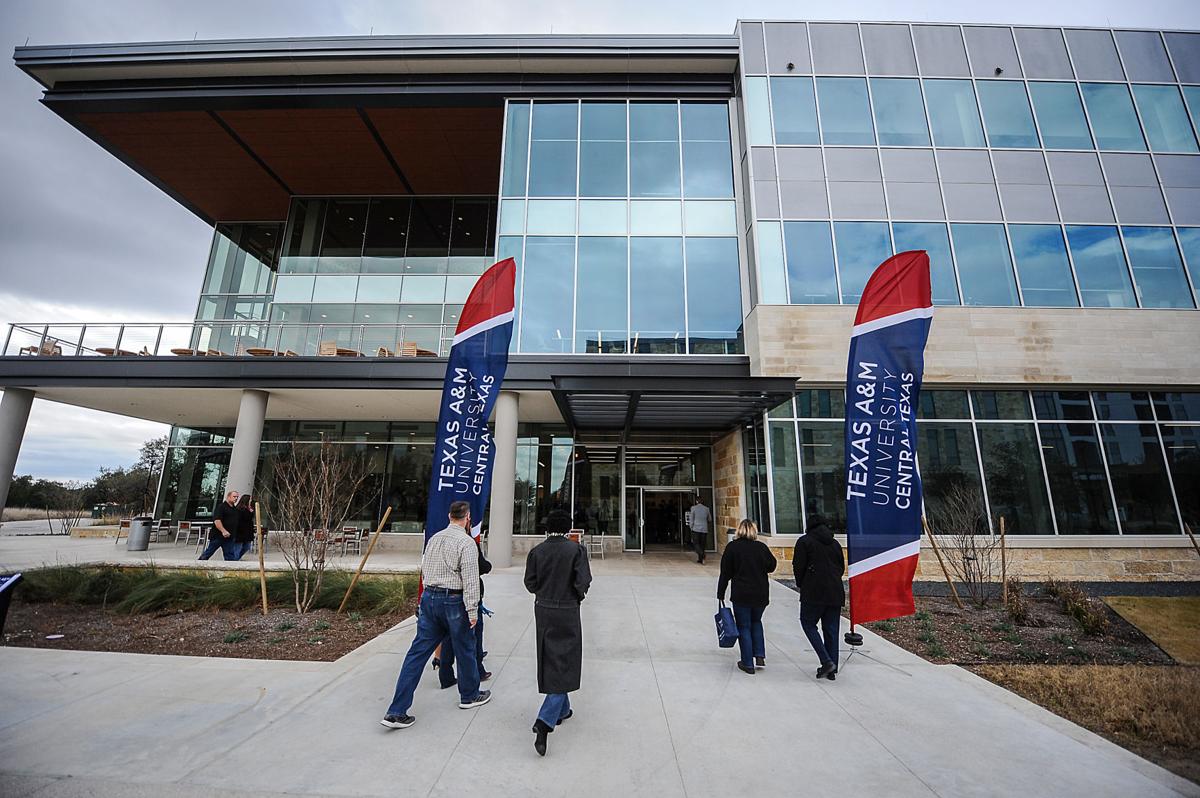 Texas A&M University-Central Texas faculty, staff and some students arrive at Heritage Hall on Friday, Jan. 25, 2019, for a dedication ceremony to officially open the newest building on the TAMU-CT campus. 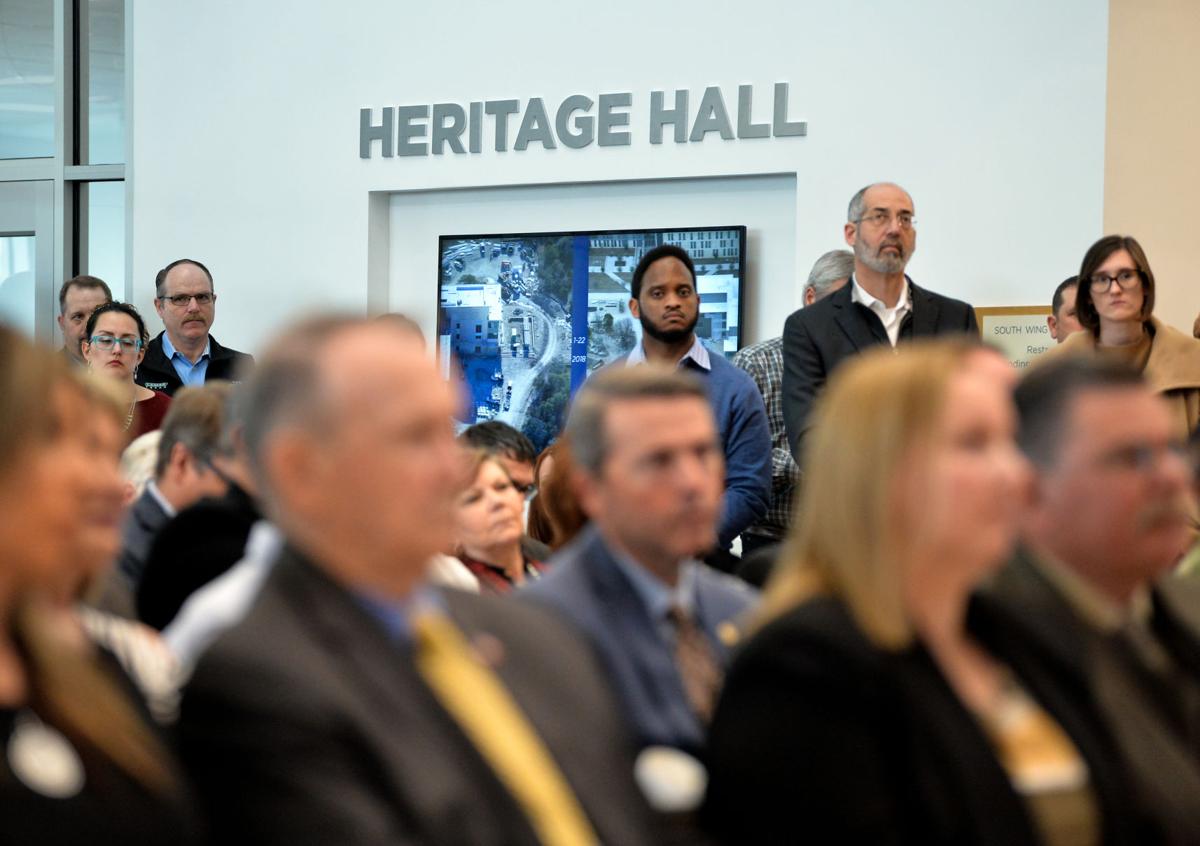 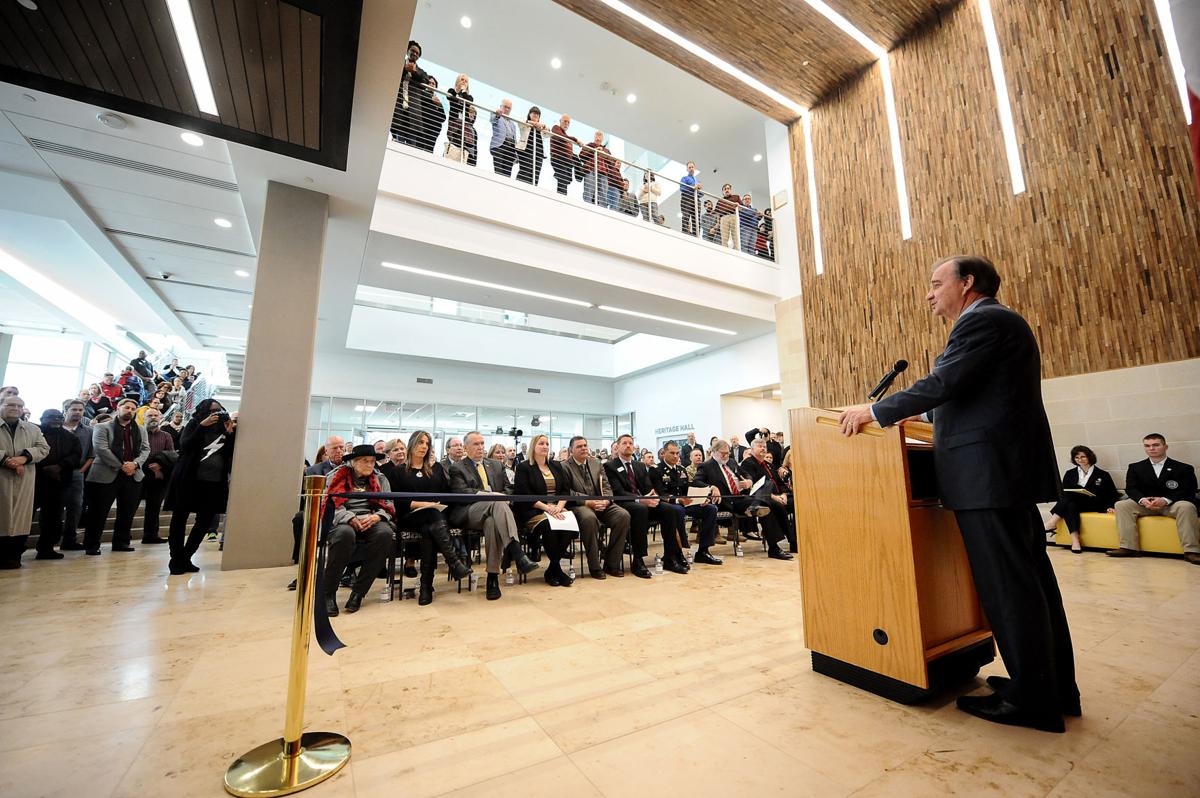 John Sharp, Chancellor for the Texas A&M University system, speaks to a packed atrium of Heritage Hall on Friday, Jan. 25, 2019. 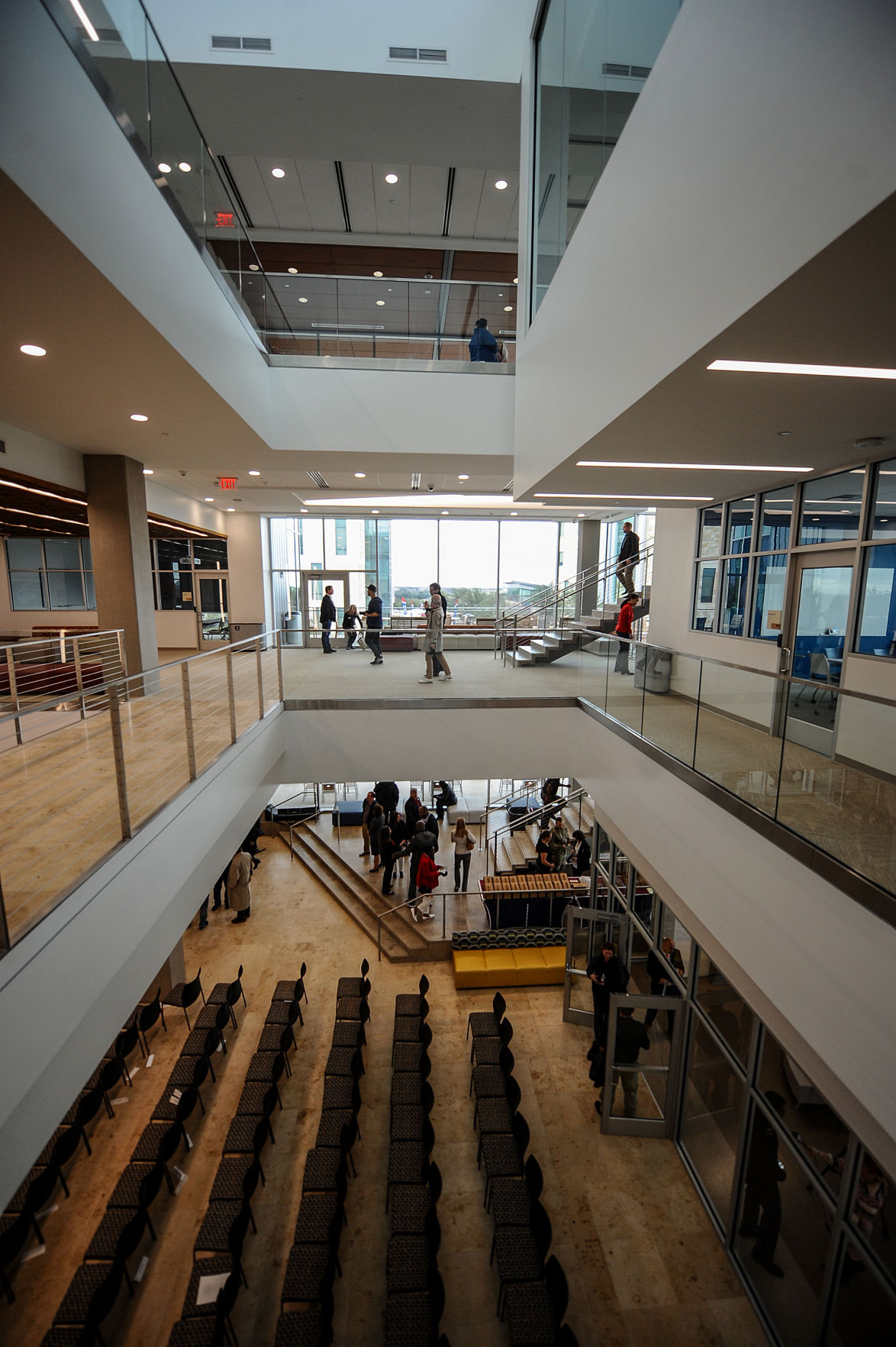 Heritage Hall’s interior is seen on Friday, Jan. 25, 2019, as the building is dedicated and officially opened as the newest and third building on the Texas A&M University-Central Texas campus. 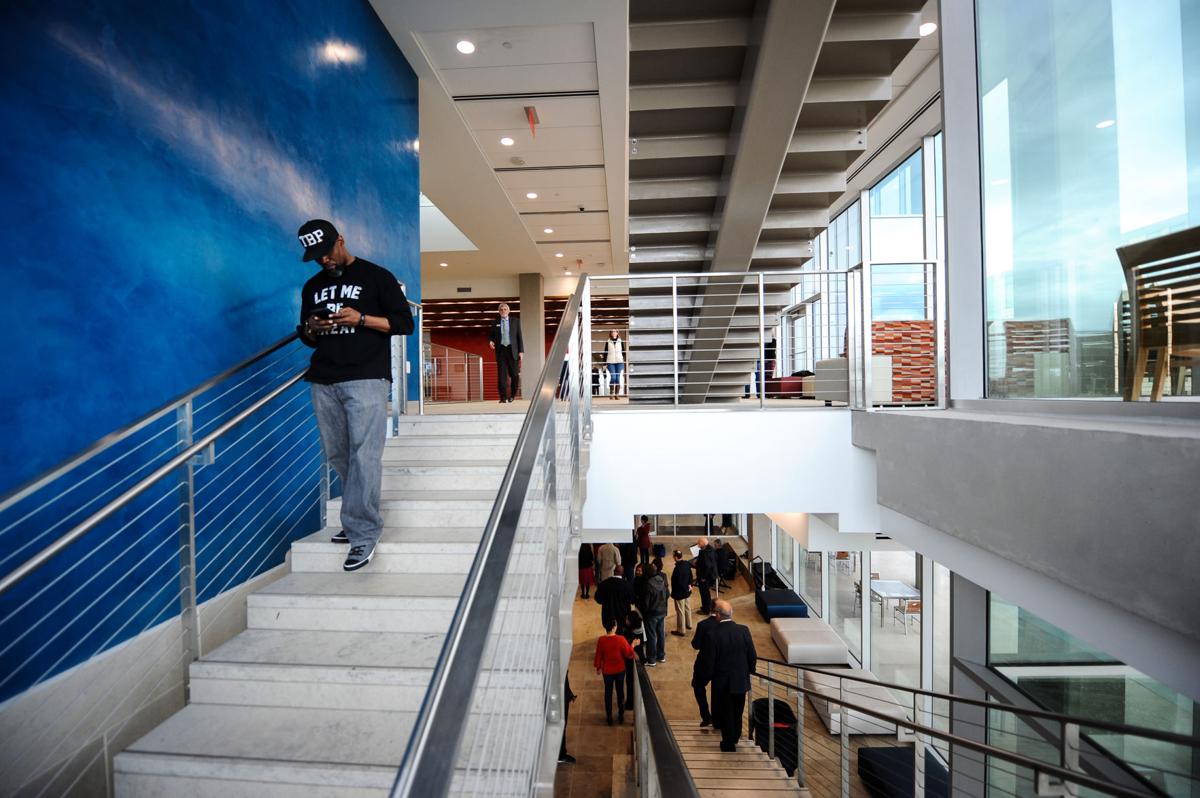 Stairs connecting all three floors in Heritage Hall are seen on Friday, Jan. 25, 2019. 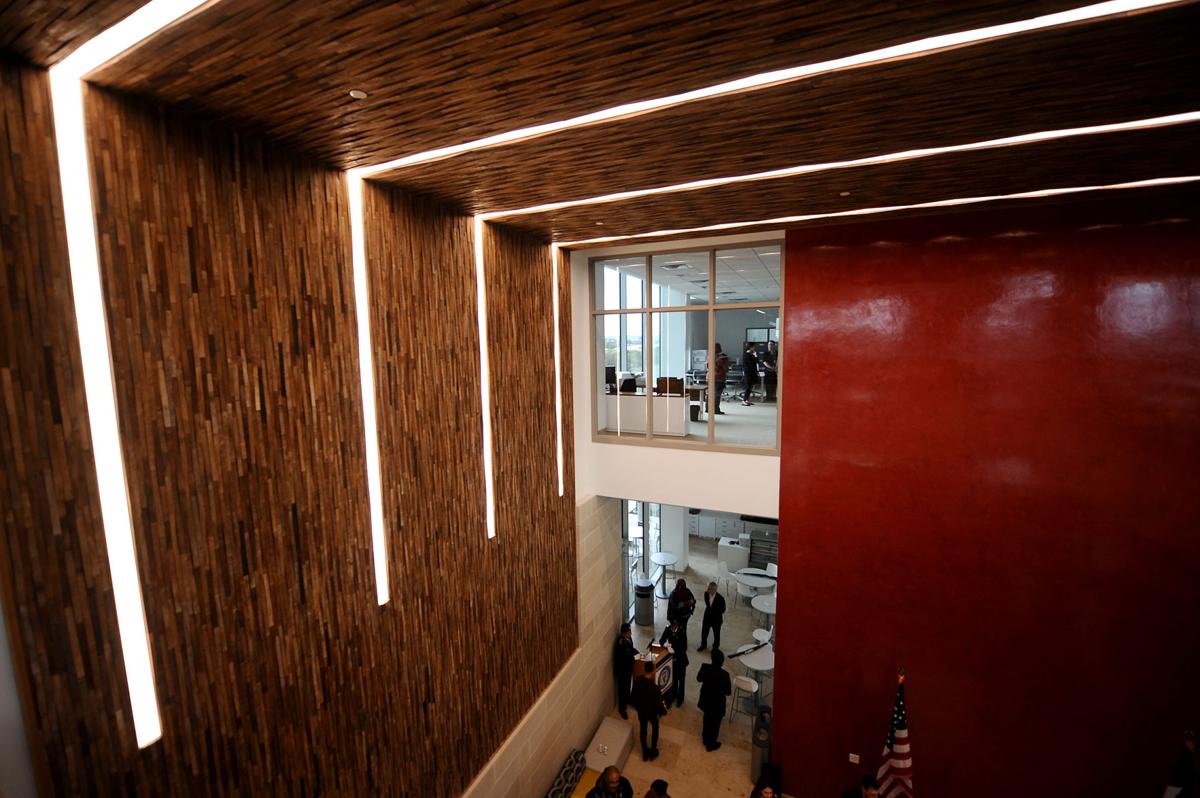 The atriums interior of Heritage Hall is seen on Friday, Jan. 25, 2019, after a dedication ceremony officially opening the newest building on the TAMU-CT campus. 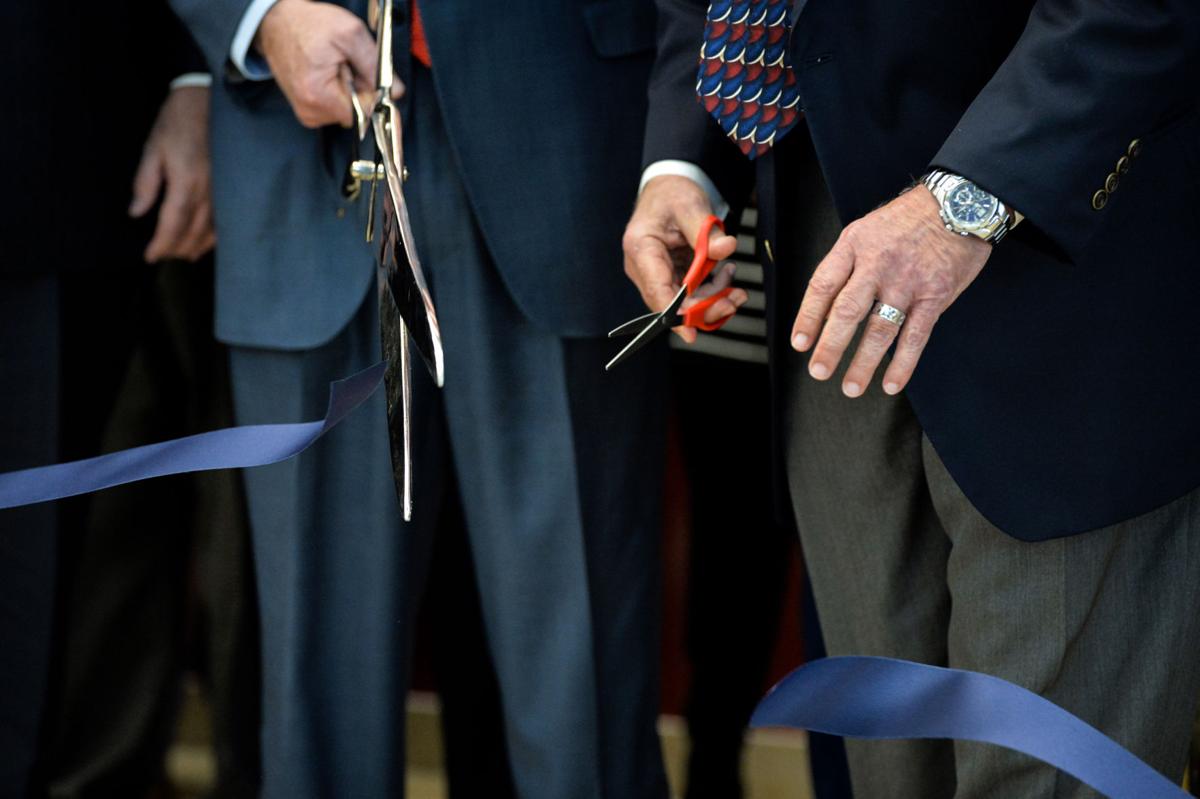 The ceremonial ribbon is cut on Friday, Jan. 25, 2019, during a dedication ceremony to officially open Heritage Hall on the campus of Texas A&M University-Central Texas. The building will house ROTC, the college of Arts and Sciences, University archives and science labs. 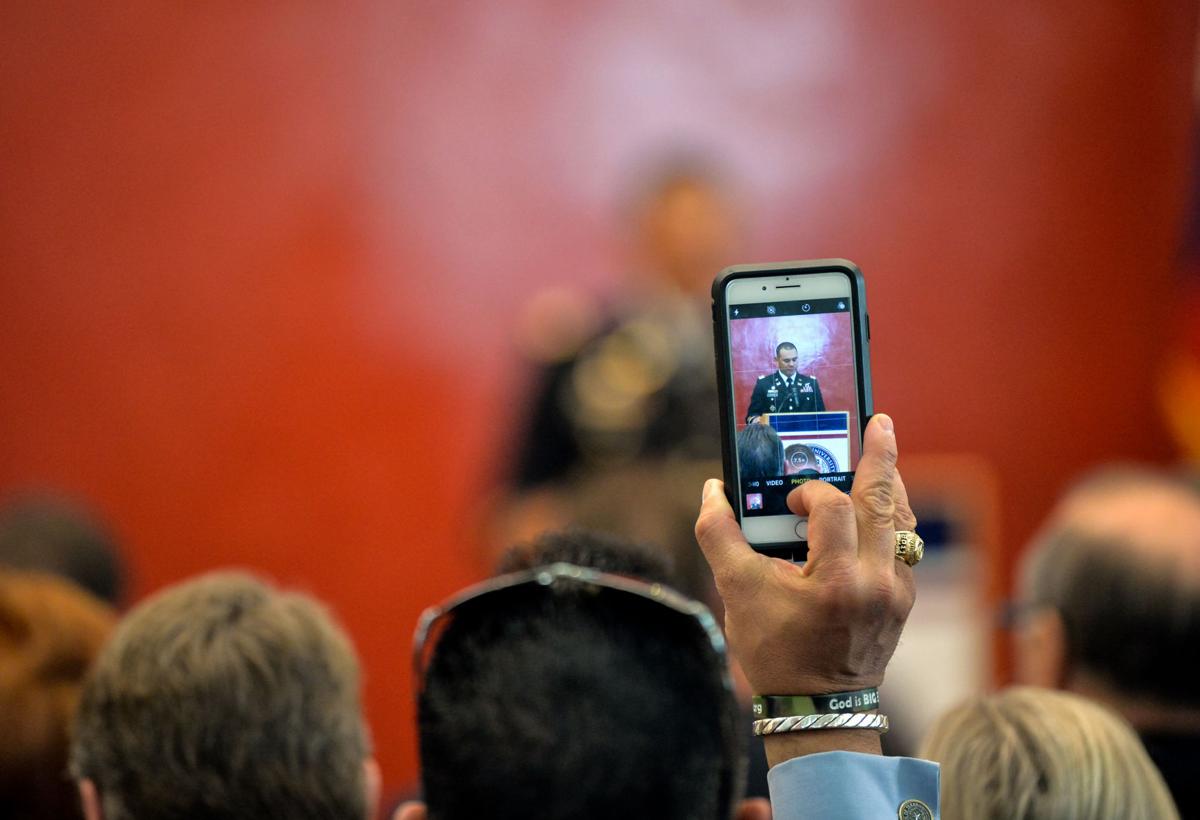 The growing university in south Killeen hit a significant milestone last week, opening its third building, and is approaching another major milestone: Its 10th anniversary.

It’s been growing ever since, and there’s a plan to continue that growth in the decades to come.

In truth, the effort to bring A&M-Central Texas to where it is today started decades ago.

“We were the product of truly visionary community champions who, in the early 1970’s, recognized the importance of access to university-level higher education for the Central Texas region,” according A&M-Central Texas officials. “These community leaders worked in unison to give birth to American Technological University which later became the University of Central Texas. Even as these first two universities thrived, it was always their goal that the university should be a part of Texas public higher education.”

After a 10-year effort, the final hurdle to bring Tarleton State University-Central Texas to Killeen was cleared in 1998 thanks to much work by then-state Sen. Troy Fraser, the Central Texas University Task Force — spearheaded by retired Lt. Gen. Pete Taylor — and others who longed to improve education and economic opportunities in Killeen.

When Perry signed the bill to provide the area with its first major public university, it was dubbed by officials at the time as the second-largest economic development to occur in the region, only behind the establishment of Fort Hood.

For former state Rep. Jimmie Don Aycock, R-Killeen — one of the leading lawmakers to push the bill through the state Legislature — it was a huge victory. At the time, he told the Herald it was one of the most significant events in the history of Killeen, representing a major shift in how the state views this area.

Over time, A&M-Central Texas acquired land from Fort Hood — more than 600 acres — which had to approved by the U.S. president. And the school built one, two and now three stone-and-glass buildings that shimmer in southwest Killeen under Texas sunsets.

For many, the university represents one of the best things in the city.

“We are very proud of the fact that we are a relatively open-admission institution, believing in human potential rather than exclusive access,” said A&M-Central Texas spokeswoman Karen Clos. “If a student has taken more than 30 hours of college level coursework at a community college (or any other university), and maintained an overall GPA of 2.0, they are eligible for admission to the undergraduate program of their choice.”

Clos said the university works very closely with a variety of local organizations ranging from local school districts and governments to chambers of commerce and workforce development programs.

“Our Office of Research and Development initiates research initiatives throughout the region that support business and industry, connecting local, state, and federal resources to strengthen the economic fabric of the region,” she said.

For area leaders, A&M-Central Texas has made a mark.

“I’m proud that we are a part of (the university’s) growth, and we congratulate them on their 10th anniversary,” Killeen Mayor Jose Segarra said. “The community is excited to see them continue their expansion, and we look forward to our continuing partnership with them.”

Killeen was not the only city to make a statement about A&M-Central Texas. As the university draws students from nearly every Central Texas city, those cities’ officials also expressed support of the school.

Local school districts have also shared their thoughts on having A&M-Central Texas as a decade-old member of the community.

“Central Texas has been an integral partner in providing excellent educational opportunities for Central Texas students and families,” KISD Superintendent John Craft said. “We look forward to working together in the future and we appreciate their success immensely.”

Over the past 10 years “faculty and staff have worked diligently to provide a first class facility, coupled with a vision for the future that compliments and strengthens the bond of the Central Texas region. The City of Copperas Cove benefits not only from the advanced education for our local student population, but also from the research and development taking place which will spawn growth opportunities for the area,” Yancey said.

For students who were at the dedication of A&M-Central Texas’s third building last week, they said they’ve made the right choice with the university.

“I’m really excited that it’s expanding. This school has honestly been one of the best. It’s one of my favorite chapters of life so far,” said Texas A&M Blue Coat Ambassador Kentina Saxon, who studies in the Clinical Mental Health Program and serves on the Alumni Association Board.

“My advisor was very assuring about this program,” he said.

“I’ll definitely be in the fitness education center. I’ve had an amazing experience. All of my professors are very uplifting. Each class is a performance, so you’re engaged and you want to learn. That’s what I love about this campus,” said marketing major Christina Hernandez. Hernandez is considering staying with the university for a master’s with future ambitions to work in wildlife and sustainability causes.

“I really like it, especially me being ROTC knowing the ROTC club room is (upstairs) and having our own gym, finally,” said political science major Brian Avalos, who is in the National Guard with plans to return to active duty as an officer.

Heritage Hall is just one of the 19 facilities outlined in the university’s 30-year master plan — which includes more roads and more buildings, including sporting complexes.

A&M-Central Texas officials are planning to mark the 10th anniversary later this year.