WHAT IS A POPCORN CEILING? (AND WHAT SHOULD I DO IF MY NEW HOUSE HAS ONE?) 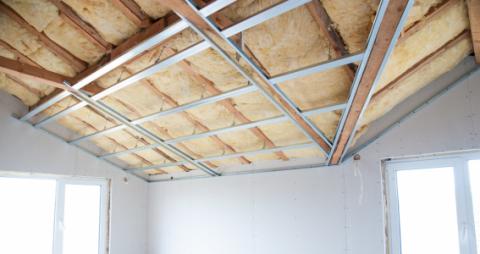 “Popcorn” ceilings are acoustic ceiling textures that were popular in the 1960s, 1970s and into the 1980s. They were used to dampen noise and were applied through painting, or spraying, the texture onto a ceiling’s surface.

The Clean Air Act of 1978 banned the manufacture of asbestos for ceiling treatments. The ban did not, however, include on-hand inventories of the product, which means it was still applied well into the 1980s.

What Do I Need to Do?

If the house you love has a popcorn ceiling, you have five options:

What are the implications of each option?

If your popcorn ceilings are in good shape, and they are not a health hazard, you can leave the retro look as is. You can even freshen them up with a coat or two of paint (but realize this will make it harder to remove them later, should you decide to do so). Contact your local health department for information on testing for asbestos and lead in your home, to help make your decision.

Scraping Off a Popcorn Ceiling

This is a tough job and isn’t one that should be undertaken lightly—or without testing for lead and asbestos, since scraping will make these hazards airborne.

If the ceiling has been painted, this will be a seriously challenging job. Paint will make a dry scrape more difficult, since the paint will have soaked into the “popcorn” and will serve as a glue, making it even harder to remove. Paint may also prevent water from reaching the popcorn ceiling to assist with the wet-scrape technique.

If the scraping technique doesn’t work, you can cut out the old ceiling, removing everything down to the studs, and install a new ceiling. Before deciding on this approach, you will need to test for asbestos and/or lead, to be safe.

If you want to keep the look and feel of your home’s era, but you just don’t like the look of popcorn ceilings, you may want to cover it with another texture style that was popular at the time your house was built.

If your ceiling is in good shape and there are no areas of loose popcorn treatment, you can hire a contractor to add another layer of texture on top of the popcorn (or try this yourself if you are handy, or feeling brave). With this approach, it’s still a good idea to have the ceiling tested for asbestos and lead.

Seal It In/Cover It Up

If your ceiling does contain asbestos and/or lead, and you don’t want to remove it and pay for remediation, adding a second layer of wallboard to safely seal in the offending ceiling is an option that will allow you to paint the ceiling in that room.

If your ceiling is hazard-free, you may want to cover it for decorative reasons. In this case, you might consider a tongue-and-groove or bead board wooden ceiling, tin/metal ceiling tiles, or another creative covering (faux tray ceiling, fabric treatment, etc.).