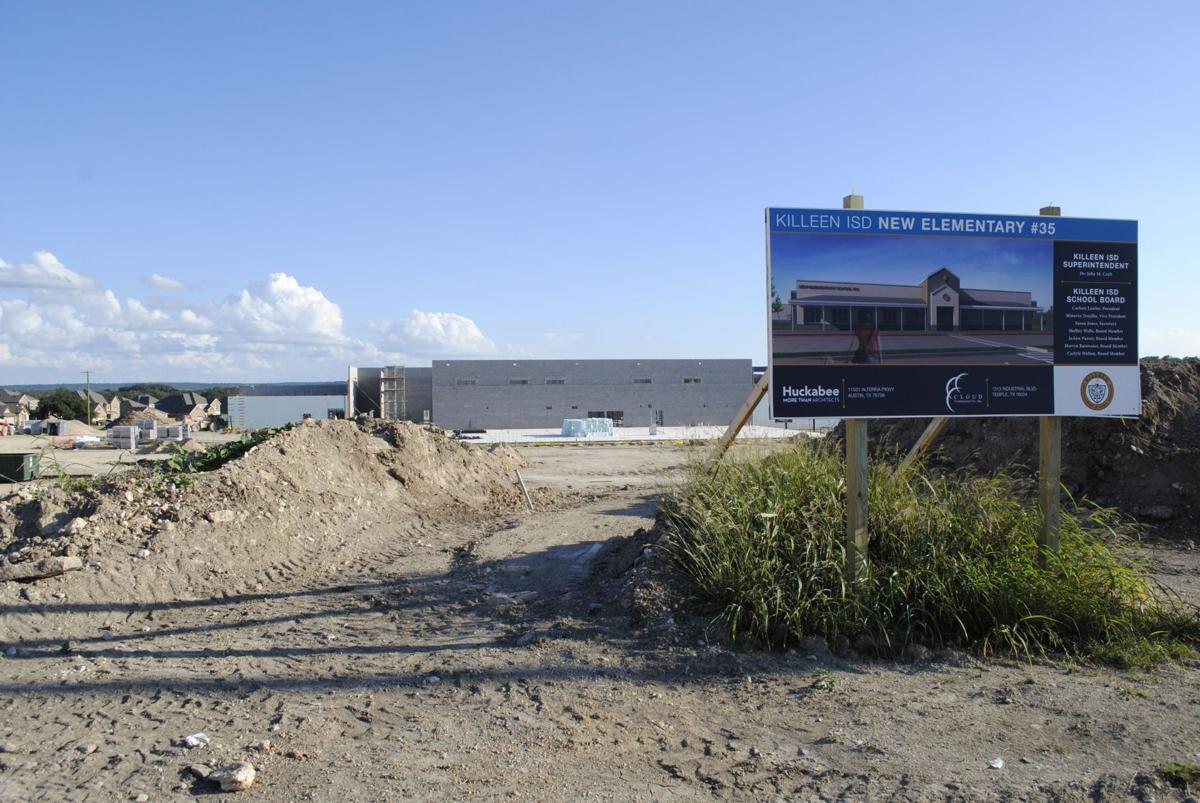 Elementary school No. 35, located near Rosewood and Morganite, is set to open for the 2019-2020 school year.

A rendering shows what elementary school No. 35 will look like when completed.

Five years ago, Killeen ISD officials knew the district was growing. They had seen enrollment numbers jump by almost 10,000 in just a decade.

Almost 24,000 students were enrolled in district elementary schools, up from less than 22,000 just five years prior. The district was adding portable buildings to campuses to accommodate the increasing number of students.

In November 2013, the school board approved the purchase of a 13.071-acre piece of land on which to one day build a campus to help ease the overcrowding.

That day has come.

The land sits on Morganite Lane, adjacent to the White Rock Estates neighborhood on Rosewood Drive, near Harker Heights, and is now the future home of elementary school No. 35.

The 2013 school board vote to buy the land was unanimous among the six members who voted. However, one member recused herself from the vote. The land was purchased from RSBP Developers Inc., a company partially owned by Gary Purser, husband of board member JoAnn Purser. As such, JoAnn Purser did not take part in the vote.

Construction began on the school in November as overcrowding in the nearby Skipcha and Timber Ridge worsened.

Skipcha Elementary, located just to the east of the elementary school 35 site, has an enrollment of 1,173, according to district officials. Two years ago its enrollment was 946. Timber Ridge currently accommodates 1,093 students.

The site of the  school sits near the boundaries of the zones for Timber Ridge, Skipcha and Mountain View elementary schools. Although it has not been determined which parts of the surrounding neighborhoods will attend elementary school No. 35, its main purpose is to alleviate the overcrowding at these campuses.

In the spring, the district will analyze enrollment and student populations in order to create the zoning boundaries for the campus.

The school is set to open in fall 2019, and although it is not part of the bond that passed earlier this year, it is playing a role in the changes that are taking place as a result of the project.

The current East Ward Elementary campus is set to close and be demolished at the end of this school year. A new replacement campus is set to be constructed on the existing site, using money from part of the $426 million bond approved by the school board and voters in May.

The new East Ward campus will accommodate students currently zoned to both East and West Ward, an area that right now stretches from Fort Hood Street past 38th Street, and from Business U.S.  Highway 190 /Veterans Memorial Boulevard to north of Rancier Avenue.

Of the $191 million section of the bond designated for replacement and renovated campuses, $44 million has been budgeted for this project.

After consideration and deliberation of multiple options for how to transition the students during this time, the school board unanimously voted last week in favor of a plan in which students from East Ward Elementary will attend elementary school No. 35 for the next two school years during construction.

At recent public meetings with East Ward parents, district officials expressed the desire to make the transition in a way that caused the least amount of disruption to the education of students.

“We are very excited to open elementary school 35, which will serve to relieve the growing student populations at both Timber Ridge and Skipcha Elementary Schools by eliminating their need for portable classrooms and providing additional space within the envelopes of the schools to allow for the continued growth of their respective attendance zones,” said Adam Rich, executive director of facilities services. “Additionally, the elementary school 35 facility will serve as the safest possible transition school for the East Ward Elementary School students as the district begins work to demolish the existing East Ward facility and construct a new, state of the art school in its place.”

An alternate plan had included the use of the former Fairway Middle School on Whitlow Drive. However, this plan would require the students of East Ward to be divided by grade, creating the possibility for families to have children attending different schools, a situation the district wanted to avoid.

Additionally, since the campus has been closed for over a decade, extensive renovations would be required in order to make the facility usable, according to Superintendent John Craft..

Residents of the neighboring White Rock Estates subdivision could see an increase in property value with the construction of the new campus.

“There has been a lot of research on the general issue of property values related to schools,” said James Gaines, chief economist for the Real Estate Center at Texas A&M University. “To the extent that the market views the new school as necessary and to be a ‘good’ school, the value impact will be positive.”

Centex Homes has 278 homes in White Rock Estates, with an average price near $250,000,  according to Mitch Driver, a new-home specialist with Centex. Driver hopes elementary school No. 35 will only add value to the homes in the area.

Huckabee Construction has been tasked with the construction of elementary school No. 35, which is well underway and on schedule to be completed in August 2019.

Huckabee has also been chosen for the construction of middle school No. 14, and the East Ward replacement campus.

Middle school No. 14, located on Warriors Path in Harker Heights near Nolanville, has been under construction since November and is set to open for the 2020-2021 school year.

The East Ward replacement campus will open prior to the 2021-2022 school year at the current site of East Ward at 1608 East Rancier Ave.

To date, no names have been considered for elementary school No. 35, according to district officials.