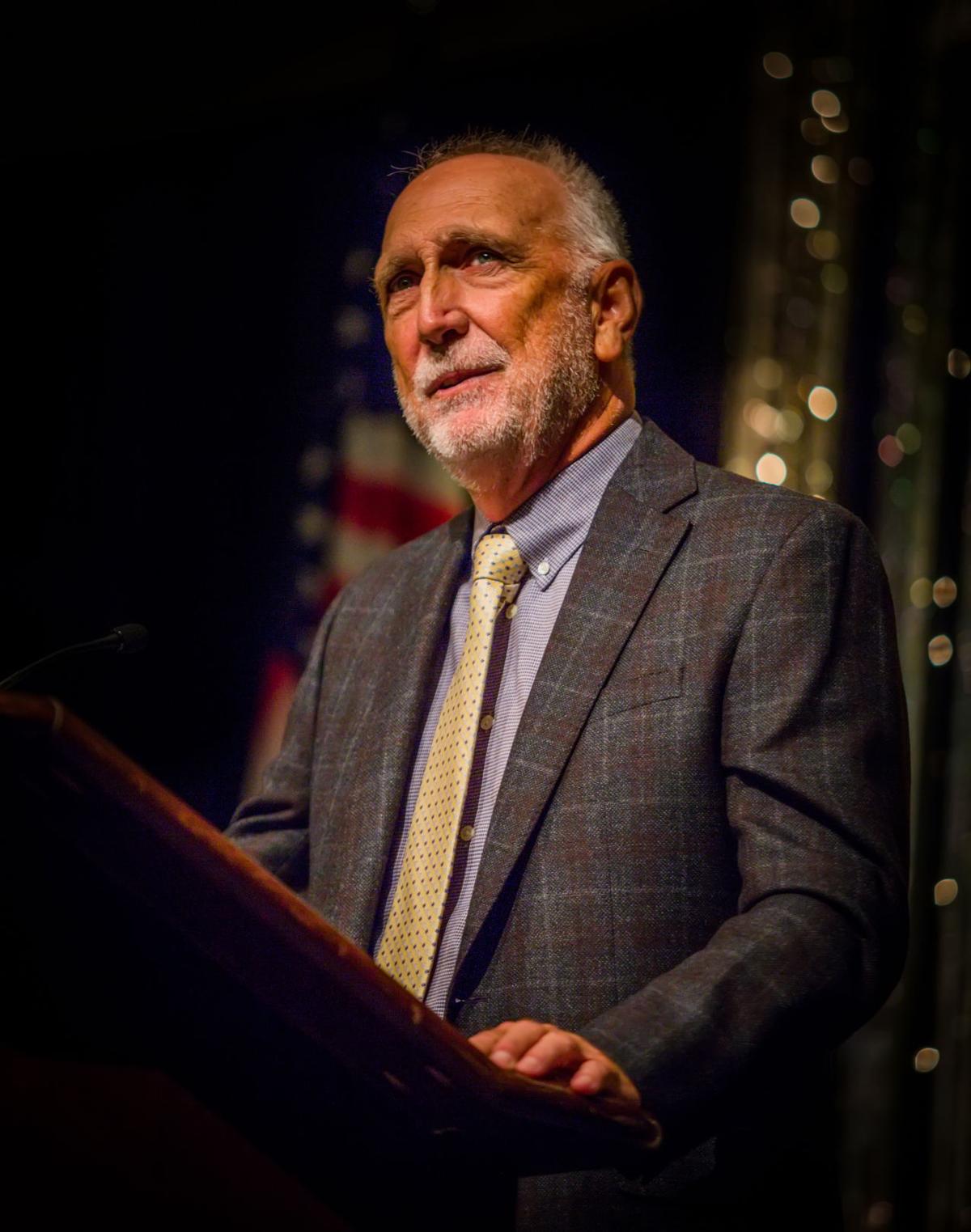 Charlie Watts, Killeen Economic Development Corporation Board of Directors president, addresses the crowd at the Greater Killeen Chamber of Commerce 85th Annual Membership Banquet held at the Killeen Civic and Conference Center on Thursday. Watts was presented with the 2018 Roy J Smith Award. 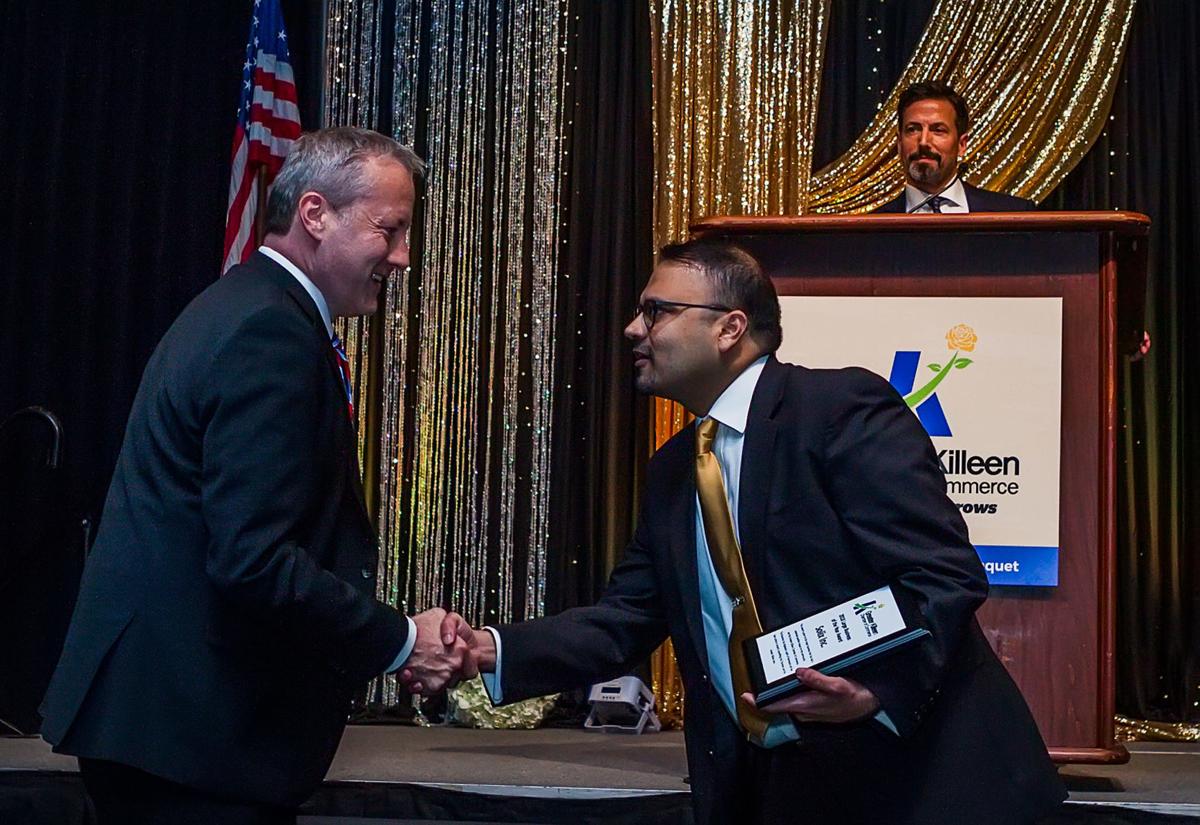 Rod Quinones, director at Solix, receives the award for 2018 Large Business of the Year at the Greater Killeen Chamber of Commerce 85th Annual Membership Banquet held at the Killeen Civic and Conference Center on Thursday.

Great Escape of Central Texas won the 2018 Small Business of the Year Award at the Greater Killeen Chamber of Commerce 85th Annual Membership Banquet held at the Killeen Civic and Conference Center on Thursday.

Approximately 540 people gathered in the ballroom of the Killeen Civic and Conference Center on Thursday for the 85th annual Greater Killeen Chamber of Commerce banquet.

Each year, the chamber hosts the banquet for guests and representatives from local businesses, as well as from Fort Hood, to enjoy an evening of celebration.

“This celebration is a great reflection of the amazing people and business in our community,” Jennifer Hetzel, director of research for the chamber, said. “We are very proud of the wonderful things our members are accomplishing in the Greater Killeen area, and the things they’re helping us accomplish.”

Abdul Subhani served as the master of ceremonies for the evening, and began by discussing the accomplishments made by the various sectors of the chamber. Subhani had served as the chairman of the chamber’s board of directors since 2016 and addressed the crowd for his final talk as chair.

“There is so much said in the news today about the differences between people,” Subhani said. “I could not be more proud to be standing here, in the middle of Texas, next to Fort Hood, as the first Muslim nationalized individual to serve as the chairman of the Greater Killeen Chamber of Commerce.”

Subhani stated that his goal as chair had been to grow businesses and the economy of Killeen. He added that over 2,250 jobs have been created over the last five years, and roughly $1.75 million in funding had been provided to local businesses by the chamber.

Subhani then turned the floor over to the keynote speaker, John Griffin. As the president for the president’s advisory council of the John Maxwell team, Griffin oversees more than 20,000 coaches and speakers.

Griffin began by recognizing the role the military plays in the community.

Griffin then displayed a photo of an acorn, and asked guests to talk with neighbors about what they saw. Answers included ‘a nut’, ‘a seed’, ‘part of a tree.’ Griffin then asked if anyone could see beyond the tree to what the tree could become, whether it be a bridge, or a house.

“The future is far beyond the tree,” Griffin said, “but it all started with a little nut that had potential, was planted in the right soil and given the right nutrition to grow.”

Griffin stated that the chamber provides the soil and nutrients for businesses to grow, and that Killeen has the potential.

“It seems to me we have a bunch of little nuts in this room,” Griffin said in conclusion.

Each year, the chamber recognizes a Small Business of the Year, which is awarded to a local business with 50 or fewer employees. This year’s winner was Great Escapes of Central Texas.

Large Business of the Year went to Solix. In its video presentation, Solix employees stated that customer service is at the heart of the company. Employees also expressed pride in the company’s volunteer efforts, citing works done with the Salvation Army, as well as hurricane relief efforts and the downtown Killeen mural project.

Since 1991, the chamber has recognized one individual for demonstrating lifelong contribution to the community. This award is considered one of the area’s most prestigious, and is named for the late Roy J. Smith. This year’s recipient was Charlie Watts with BKCW.

In his speech, Watts deemed himself a “serial volunteer,” but stated that he would not be able to do the things he does for the community if it were not for his business partners and supportive wife.

“I cannot tell you how proud I am of this community,” Watts said. “This is the best community in the United States, and put me on the lifetime team of the Greater Killeen Chamber of Commerce.”

The Public Education Council named Angenette Wilkerson with KISD its Individual of the Year.

“First and foremost, I was both humbled and honored to have been nominated for such a prestigious award,” Wilkerson said. “To receive recognition for doing the work I enjoy so much, motivates me to stretch farther, dig deeper, and give greater than ever before. Receiving this award increased my desire to help my community reach its full potential.”

Texas A&M University Central Texas was named Business of the Year by the education council.

The Welcome Council named Cathy Sween of AmeriStor Self Storage member of the year.

Non-profit of the Year was awarded to Operation Phantom Support.

Greater Killeen Young Professional of the Year was awarded to Ally Torres of First National Bank of Texas.

“The chamber is a great way for young adults to get involved in the community,” Torres said.