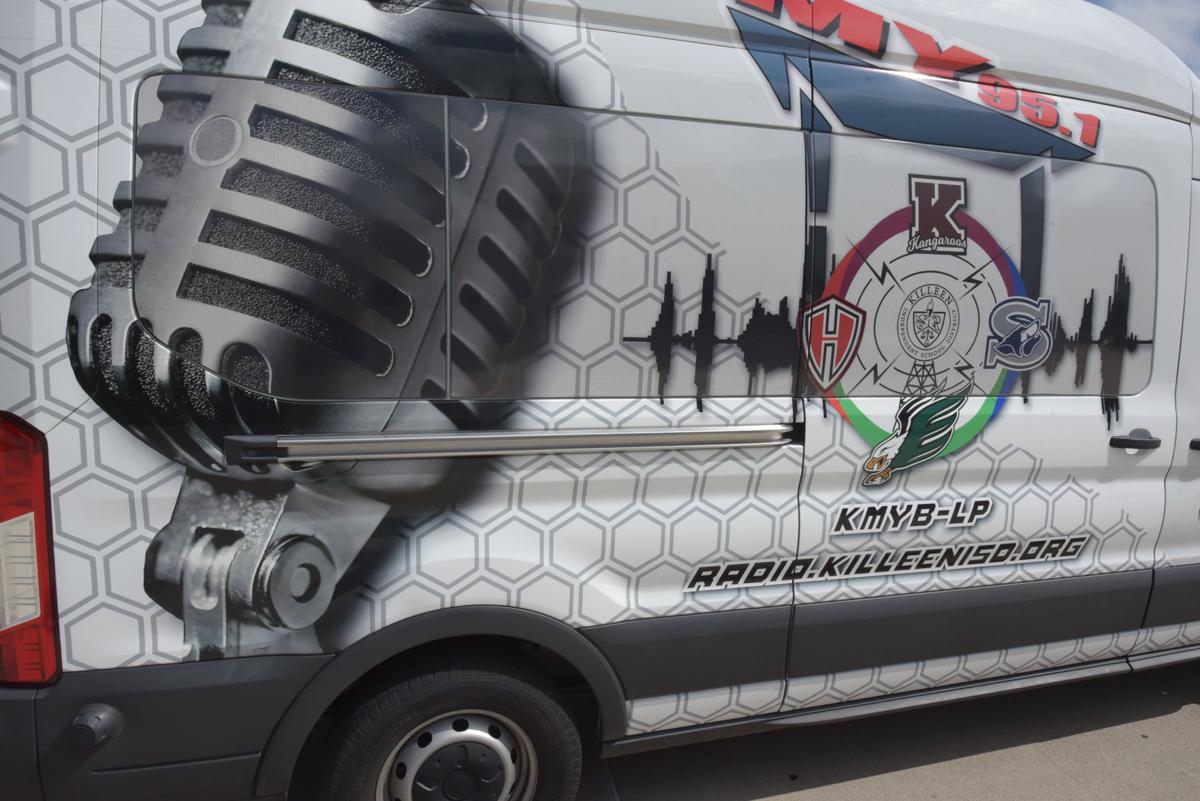 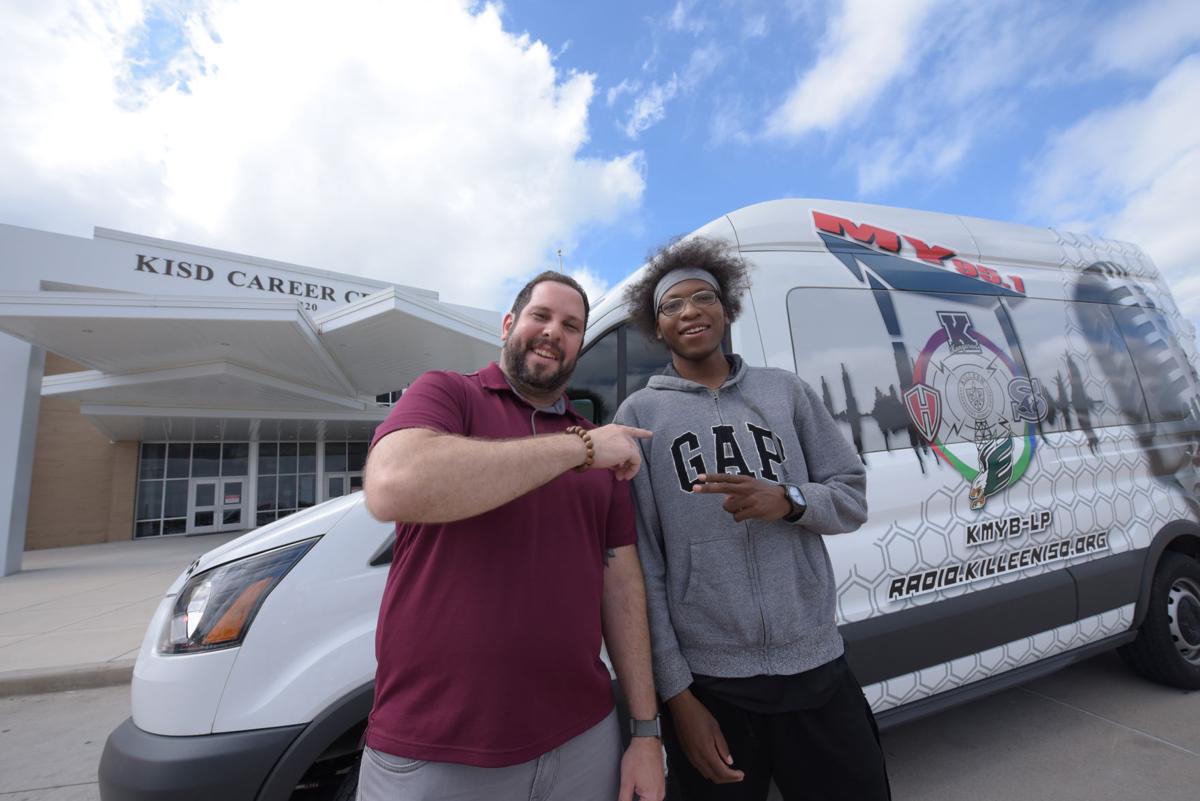 Outside the KISD Career Center on Thursday, Sept. 13, 2018, graphic design teacher Duane Robinson, left, and former student Laydron Johnson credit each other for the new graphics installed on a school district van. The design, which Johnson came up with as a student in 2017, promotes the district’s MY 95.1 FM radio station.

Former KISD Career Center graphic arts student Laydron Johnson, right, is thrilled Thursday, Sept. 13, 2018, to see for the first time his design installed on the side of a school district van to promote KISD’s MY 95 radio station. His teacher, Duane Robinson helped complete the project.

The freshly-designed KISD van, which pulled out for the first time this month, is hard to miss and that’s exactly what Career Center radio broadcasting teacher Jamie Garrett had in mind.

The real beauty, though, of a van displaying a huge microphone and the four high school logos and KISD logo is that it was a Career Center student who came up with the design and his graphic design teacher who added the finishing touches.

If you happen to notice in your rearview mirror the station’s website printed on the front of the van, that, Garrett said, is his one and only contribution to the project.

The master designer in the project was Laydron Johnson, an Ellison High School Class of 2017 graduate who created the design a year-and-a-half or so ago in his graphic design class.

A few days ago, Johnson’s friend Jared Petit, also a recent KISD graduate, told his friend about the van, which he saw on social media. He was pretty sure the eye-catching design was his.

“My friend here saw the van on social media and said ‘Wow, I’m proud of you,’” Johnson said. “I freaked out.”

On Thursday, the two friends visited the Career Center to see the van for the first time in person and to reunite with Garrett and graphic design teacher Duane Robinson.

“That’s crazy, my logo is on a van,” said Johnson, now a Central Texas College student, as well as a videographer with aspirations for travel and business.

“Seeing his reaction makes my day, really my year,” said Robinson. “This is the reason I do this. Hopefully, this is something that rejuvenates you,” he said to his former student, who seemed pretty rejuvenated.

All those involved in the project said it was the incorporation of the four KISD high school logos and KISD logo that illustrated the mission of the Career Center, the district’s career-focused high school that draws its enrollment from all the high schools.

The Killeen, Shoemaker, Ellison and Harker Heights logos circle the KISD logo. Other accents in the design suggest pulsing airwaves. It also includes the Career Center logo that suggests the outside of the distinctive building. There is also a huge radio microphone and printed in red lettering, MY 95.1.

The van made appearances Sept. 11 at the KISD community Freedom Walk and at the Ellison High School open house. In addition to transporting students and equipment, the vehicle will be visible at a variety of athletic events where the district radio station broadcasts.

“This gives us the ability to transport our (radio broadcasting) practicum students to district events,” Garrett said. “It’s basically a big, rolling billboard.”

Radio broadcasting, now in its fourth year at the Career Center, doubled its enrollment since its inception. The station debuted in January 2016 and now shows up in the Nielsen ratings and draws hundreds of listeners through its online presence.

According to feedback from listeners, Garrett said, there is a loyal base of fans drawn to the low-power FM station because it is commercial free and provides a good mix of music as well as the local athletic broadcasts.

Two years ago, Johnson was a graphic design student working on a logo for a grade. He said he worked through several drafts and realized he needed to incorporate all aspects of KISD in order to stand out from other designs.

“I didn’t even know it was a competition,” he said. “When I visited Mr. Robinson’s class later and saw it printed on the wall, I said, ‘Wow, you’re really doing this.’”