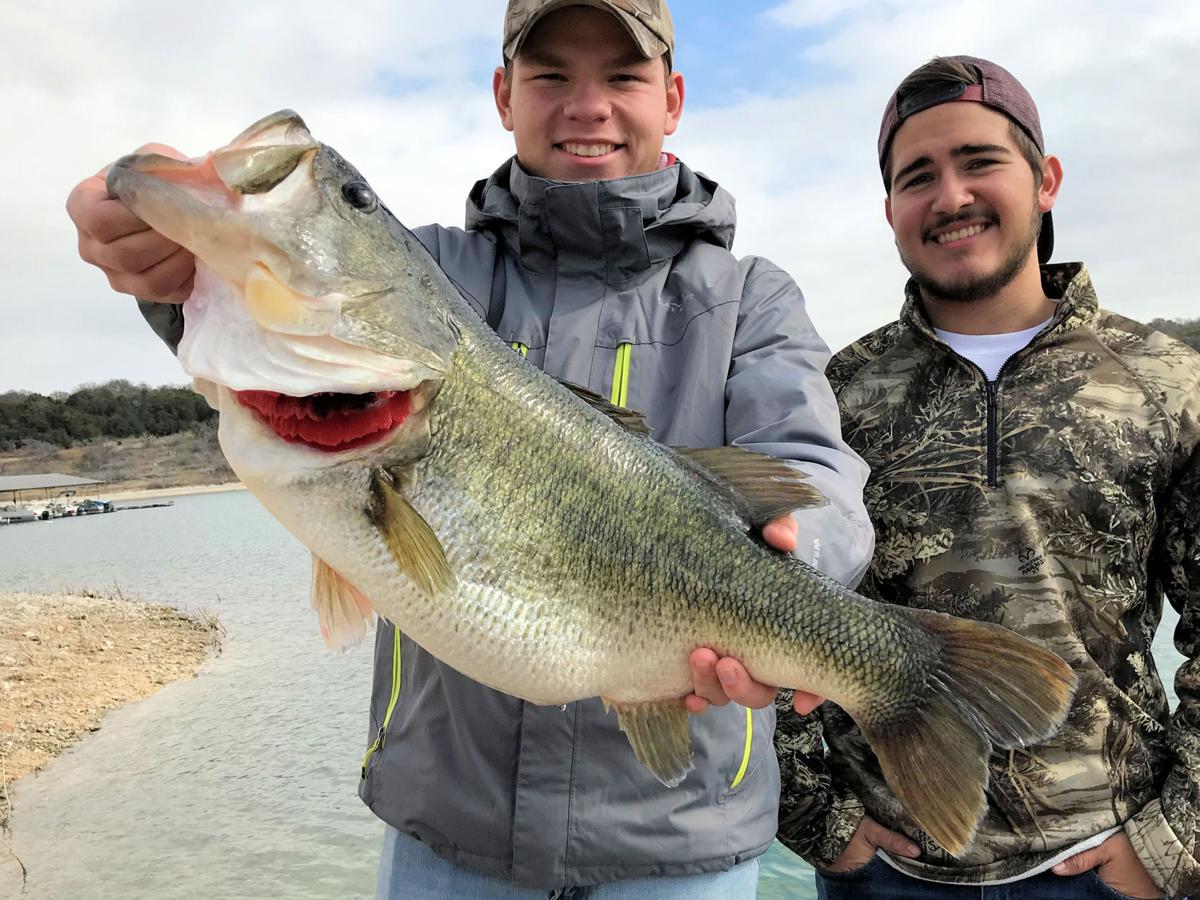 From left, U.S. Army Maj. Michael Byrnes; his 9-year-old son, Michael; and his 13-year-old daughter, Evelyn; show three of the 68 fish they caught on a free SKIFF (Soldier Kids Involved in Fishing Fun) program trip to Belton Lake. During this trip, both kids caught the first fish of their lives.

The action was still strong over the weekend and prior to the winter storm’s arrival in the overnight hours late Monday into early Tuesday morning.

My Monday morning crew of five from Liberty Hill, Texas, managed 105 fish — all taken on slabs fished with a snap-jigging tactic using a light, 3/8-ounce. slab retrofitted with a Hazy Eye Stinger hook.

Two days prior, on Saturday, Jan. 13, the second day of a four-day warming trend, my crew of three landed 68 fish during an afternoon trip on Belton Lake. Joining me on this outing was U.S. Army Maj. Michael Byrnes, his 13-year-old daughter, Evelyn, and his 9-year-old son, Michael.

Less than a year ago Maj. Byrnes was working at his civilian job as a cellphone company systems analyst near Marshall, Wisconsin. Byrnes was notified that his U.S. Army Reserve unit was being activated and sent to Fort Hood to help other U.S. Army Reserve and National Guard units prepare logistically for deployment overseas.

Byrnes and his wife, Lyndsay, made the tough decision to uproot the entire family and come to Fort Hood for just one year for the sake of staying together. Thanks to the fundraising efforts and donations of the Austin Fly Fishers, I was able to offer the Byrnes a day on the water, free of charge, during this time of separation from friends and family back home.

Nine-year- old Michael had never been fishing before, and Evelyn had been fishing twice but had never landed a fish before. We met at Belton Lake at 1:45 p.m. Within 30 minutes, both youth had landed the first fish of their lives. Evelyn landed a 17 3/8-inch freshwater drum and Michael landed a 7¼-inch white bass.

Because their first fish were landed in Texas waters, both children earned a Texas Parks and Wildlife Department “First Fish Award.”

Fort Hood children separated from parents due to military duty are eligible for free fishing trips via the SKIFF (Soldiers’ Kids Involved in Fishing Fun) program year-round by calling 254.368.7411.

As I was about to wrap up Monday’s trip on Belton Lake, my cellphone began to go crazy. Local bass anglers were scrambling to assist Jonas Inman get a monstrous bass he had just landed on Stillhouse Hollow Reservoir measured and weighed in hopes of eclipsing one of the existing lake records for that species.

TPWD keeps various sets of records on each body of water — one for junior anglers (under age 17) and one for all ages. Both of these categories are further subdivided into a catch-and-release category managed by length, and a ‘Rod & Reel’ category (for kept fish) managed by weight.

When all the dust settled, Inman’s bass weighed 12.06 pounds on a certified scale provided courtesy of James McDonald of the Cen-Tex Bass Hunters club. The bass measured 25.75 inches. The fish was released alive.

Unfortunately, the existing Rod and Reel record of 12.74 pounds caught in 2008 was not eclipsed by Inman’s fish, nor did the 25.75-inch length of this fish exceed the 27-inch long existing catch-and-release record, also landed in 2008.

Inman’s fish does qualify for a “Big Fish Award.” If an angler accumulates three such Big Fish Awards for three separate freshwater species, he or she earns Texas Elite Angler status. Regardless of records, a fish of this size is a true rarity on Stillhouse Hollow.

The Central Texas Boat Show takes place Friday through Sunday at the Bell County Expo Center in Belton. Highlights of the show include three live bass tournament weigh-ins and an outdoor gear fashion show, complete with live models on an elevated runway.  This modeling event, by the Nori Consulting Agency, takes place Saturday from noon to 12:45 p.m.

At the weigh-ins, spectators can see freshly caught fish from our local reservoirs and hear the stories of their capture before the fish are released back into the waters from which they were captured.

Weigh-in for the Central Texas High School Tournament Trail will take place in the dome at 1:30 p.m. on Saturday.

Numerous boat dealers, fishing tackle dealers and other outdoor professionals and organizations will be showcasing their wares and services and providing live seminars throughout the show. Seminars include: crappie fishing by Greg Culverhouse and Tommy Tidwell, fly fishing by Bob Pohlman, and my own seminar on sonar use and interpretation.

A full show schedule may be found at www.centraltexasboatshow.com.